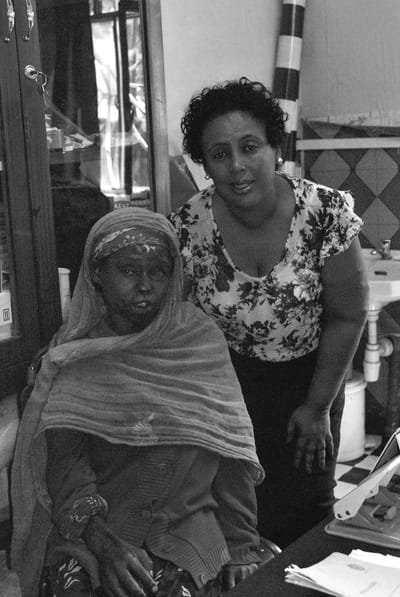 "I like myself, but people don't like me. I like the people who like me. No one wants to touch or kiss me, not even my family," says the 22 years old Fatima Zeynu. However, Fatima was lively when she spoke and craved friendship. Fatima fell into an open fire due to an epileptic seizure while cooking in an open fire. Even though her mother removed her immediately from the accident scene, the flame has already made the damage burning her face, neck, chest wall, abdomen, front thighs, forearm and hand. Consequentially, her skin shrank up to close the wounds, creating what is known as burn scar contractures, and she was subjected to a skin graft. This is one of the multiple post-burn scars that Fatima carries with her. Though Fatima has been on medication for the past eight years, it has done very little to control the seizure. Once very two months, Fatima travels 110km from Bonga to come to Jimma Hospital for her follow-up appointment. Unfortunately, this journey is too painful for Fatima; people stare at her scars, bus assistants refuse to take her on the bus more often than not, and, worst of all, her parents refuse to accompany her or be associated with her. Such encounters with the members of the society have forced Fatima to believe that she is cursed and has some sort of evil spirit inside her. As a result, she does not want to get married for fear of passing epilepsy on to her children or having a seizure during her pregnancy and hurting the baby. Fatima wishes to work and support herself and spend time with other people who live with epilepsy to share her problems. 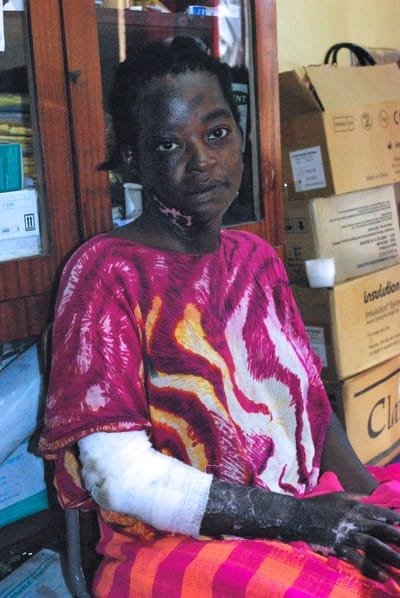 “This is a punishment from God,” says the 30 years old Kadina Kofto while referring to her epilepsy case. She wants to have friends of her age, but she feels her epilepsy is a deterrent for relationships. Though she wants to get married and start a family, she is convinced that no man will marry her. As a result of such self-deprecating views, she often suffers from depression and self-hate. One day, Kadina lost consciousness while baking injera in an open fire. She fell into the fire, which burned 7.5% of her leg, forearm and hands. This is one of the many generalized seizures that left her with scar contractures and, sometimes, infections. Kadina used to have seizures at least twice a day. But now, she has it less often than before, thanks to the combination medication of Phenobarbital and Phenytoin. Though she has to travel 21 km from her village, Seka, for a medication refill, she is still hopeful. She wants to work and support herself and spend time with other people like her to share her experience. 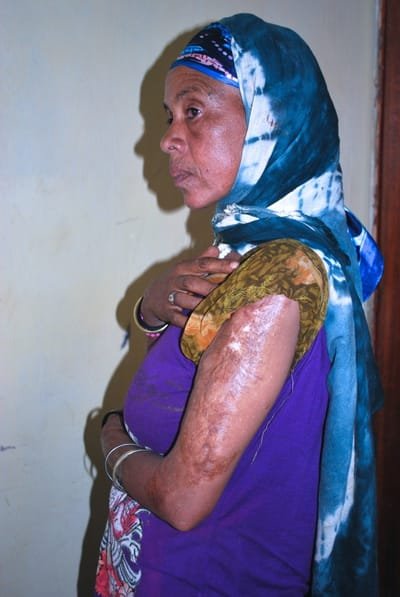 Aisha's story is by far the saddest of all epilepsy stories. It vividly shows the severity of seizure-related cases in rural regions of Ethiopia. Aisha is a 40 years old woman who believes that she is possessed by some sort of evil spirit and had never attended a clinic for epileptic treatment before suffering a burn. One day, she lost consciousness and fell into the flame while making coffee on an open fire. This accident resulted in a 3rd-degree burn involving her forearm and chest. Aisha had to go through a debridement and skin graft surgery. Fortunately, the catholic mission in Jimma helped her to build a hut as a safe place for recovery. As if having to suffer a 3rd-degree burn wasn't enough, Aisha lost her daughter for a seizure-related burn. One day, Aisha visited the nearby hospital since she wasn't feeling well. It sounds like she was given a sleeping tablet. Upon returning from the clinic, Aisha went straight to bed after ordering her daughter to prepare soup for dinner. Little did Aisha know that it was the last time she would speak to her daughter. As soon as she woke up, Aisha went to the kitchen, hoping to share a meal with her daughter. Still, she wasn't prepared to witness the scene in the kitchen: her daughter was face down, breathless, with the pot full of soup burning through her belly cell by cell. It didn't take long for Aisha to realize that her daughter had a seizure attack while cooking and that her worst nightmare had come true. Aisha hugged her little girl's dead body, hoping to detect a breath and to see that innocent heart-warming smile, but that was history. The daughter had developed epilepsy at the age of five and was on combination therapy of phenytoin and phenobarbital. But, she did not take phenytoin for the preceding 3 days before her death because none was available in the hospital. Aisha lives with guilt and regrets. She wishes to die and join her daughter. But, who is to blame: Aisha, the clinic that has run out of the daughter’s medication or the entire system that has failed the innocent child? 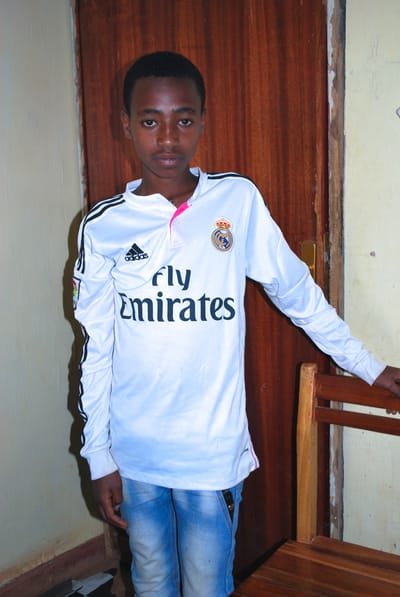 A 14-year-old boy with a behavioural problem, Edamin grew up deprived of his mother’s love since she left him long ago. She couldn't cope with the challenges and the stigma associated with epilepsy. His father is very emotional about being a single dad. However, he believes that a good education is a ticket to a bright future for Edamin. However, Edamin has been in the 2nd grade for the past four years not because he isn't smart enough but because his teacher won't let him progress due to his epilepsy. The father has questioned the teachers and reported to the school but to no avail. He even tried to register him into a private school, but the school refused to take Edamin. In addition, the bullying in school is also getting unbearable for Edamin. His peers hit him with a stick and call him names, including "here comes the evil spirited one." All of these combined, Edamin now refuses to attend school, which hurts his father deeply.

Edamin: A boy living with epilepsy 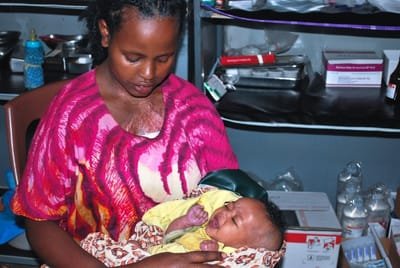 Zeyneba Mohammed: A women with epilepsy 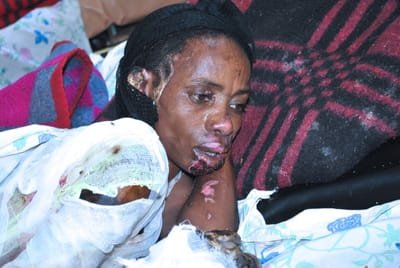 Bandi was not able to talk much as her mouth was soar. You could hardly hear her voice. When I asked her about her epilepsy, she had no idea what epilepsy was about, but she thought it was a curse. As a result, she has never received any medication, even though she has been suffering from generalized tonic clonic seizures for the past 16 years. Bandi sustained a burn accident involving the ear, face, neck, arm, and hand when she lost consciousness while baking injera in an open fire. Now, she has a fever and wounds that look warm, red and painful. Foul odour and pus was coming from the wound and stuck on her blanket. Her infection was characterized by abscess formation, foul-smelling pus, and tissue destruction. Her life is at a fork road; if she does not die of sepsis, she will have to amputate her hand.

Bandi: A women with epilepsy 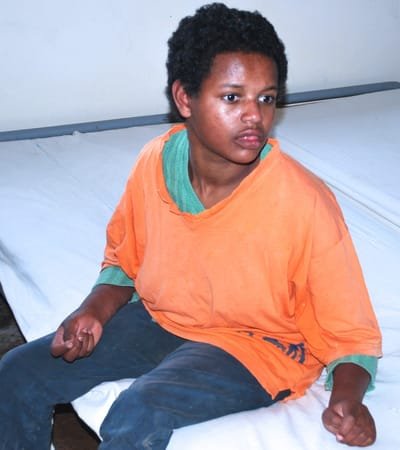 Her father left her at the Mission door with a note stating her being possessed by the evil spirit and that the family could not care for her anymore. No one knows where she is from. They did not know her name, so the mission gave her Kidist Theresa [named after Mother Theresa]. Kidist lives with autism and epilepsy. She repeats words and phrases. She has little interest in interacting with other children and does repetitive movements such as flapping her hands rocking back and forth. Kidist has no access to medication and has never been seen in a hospital for her condition.

Kidist Theresa: A child with epilepsy 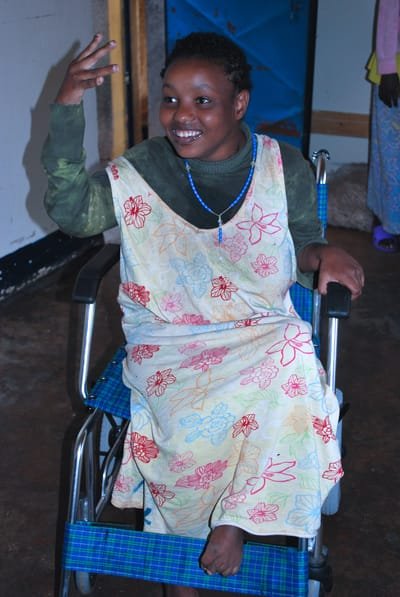 Bethlehem has cerebral palsy, a beautiful girl with a smile that lit the room. She cannot sit on her own because of poor balance and coordination. She has also epilepsy and intellectual disability. Bethlehem also drools because she has poor control of the throat, mouth, and tongue muscles. She does not receive anti-seizure drugs to control her seizures.

Bethlehem Theresa: A child with epilepsy 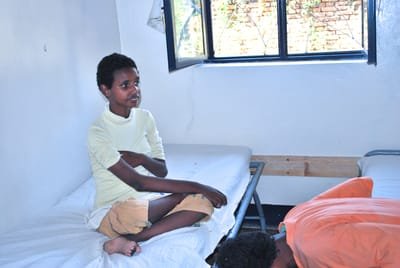 Sara has epilepsy and autism and is not on medication. She was left at the Mission door at the age of 5. “At least 5 times a day”, the nurse said when talking about the frequency of her seizure. She experienced many injuries when she fell down due to the seizure.

Sara Theresa: A child with epilepsy 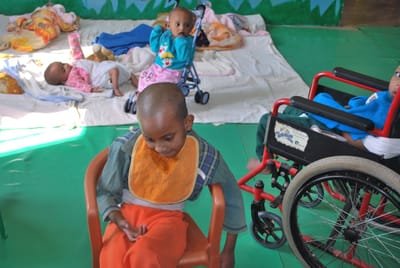 Aster has spastic quadriplegia, the most severe form of cerebral palsy with severe intellectual disability and deformities of her spine. She has severe stiffness in their limbs but a floppy neck. Aster is not able to walk or speak. Her seizures are frequent, and she gets exhausted afterwards. Aster is among the children left at the mission door with no family story to tell. She has not received any treatment for her medication.

Aster Theresa: A child with epilepsy 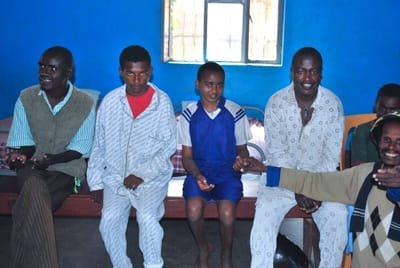 Until age 12, Yohannes lived in Bonga town, in Southern Nations, Nationalities, and People's Region. He was left by the side of a road in Bonga until foreign visitors found him and took him to the Mission house. Yohannes has seizures soon after falling asleep, before waking or around arousal during the night. When we took this picture, he had four seizures last night, which apparently is typical for him. He is not on medication for his seizures as there are no children services. Yohannes - 3rd child from left to right.

Yohannes: A child with epilepsy 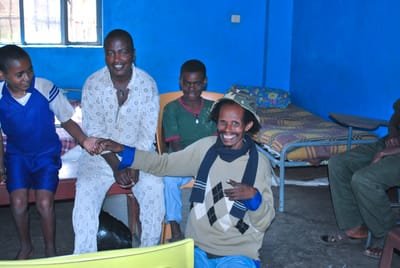 Ashebir has been diagnosed with epilepsy for 10 years now. He is on medication but has not achieved seizure control. He has seizures at least 3 times a week. He also suffers from mental retardation.

Ashebir Mekuria: A man with epilepsy 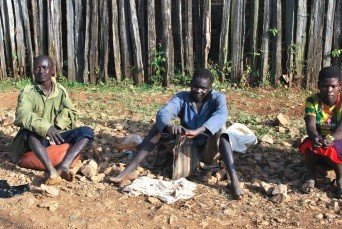 These patients have epilepsy and are not on an anti-seizure drug. They were found begging for food in Mizan-Aman town by St. Michael church. Mizan-Aman is located in the Southern part of Ethiopia in SNNPR State, Bench-Maji Zone, at 561 Km from Addis Ababa. The community believe epilepsy to be an evil spirit and contagious, which is trying to enter the concerned family. Stigma and exclusion are common features of epilepsy in this community and a major contributor to the burden associated with the condition. Stigma here is based on two myths: that epilepsy is contagious and caused by demonic possession. Belief about possession traverse societal boundaries. In most cases, it is not related to the level of education or literacy. Sometimes, the most educated people will tell you that it's demonic. They say it's in the Bible.

Menit Tribe: A child with epilepsy 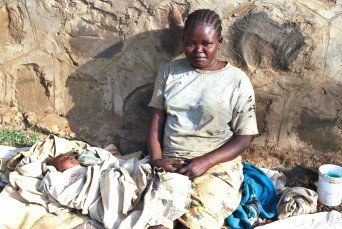 This miracle baby was born with a seizure in Meinit Shasha, one of the woredas in the South West Ethiopia Peoples' Region of Ethiopia. Part of the Bench Maji Zone (southern Ethiopia). The grandparents and the community wanted to do mercy killing to relieve him from his suffering from an incurable and evil spirited disease. His mother, aged 16 ran away from home and lives on the street of Mezan Aman town as a begging. The child continues to have seizures as she has not been seen by a doctor and started taking anti-seizure drugs.

A miracle baby: A child with epilepsy